Caravel & DeliverMyStrategy in the News

DeliverMyStrategy addresses a critical need for the Australian and international business community, governments and others who implement major change, build significant infrastructure and undertake large and complex projects and portfolios. 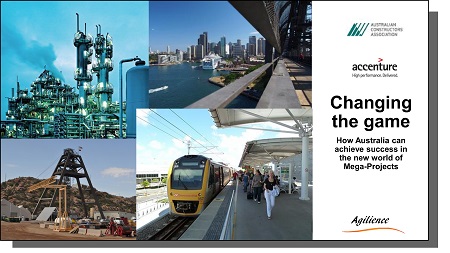 Here are a few insights from some of those organisations that point towards the value that DeliverMyStrategy and Caravel Group can bring:

Caravel Group participated and were cited in the recent research report “Changing the Game – How Australia can achieve success in the new world of Mega-projects” by Agilience, Accenture and the Australian Constructors Association (access it here, from the Agilience website, or by clicking on the image at right).

Basing their approach in part on Caravel Group’s research, Acciona have delivered Brisbane’s major tunneling program ahead of schedule and within stringent requirements of their numerous clients – and the people of Queensland.

Citing Caravel Group‘s research, West Australian Senator Chris Back’s 10-minute speech on Infrastructure and Governance of Engineering Projects in June 2014 discussed wastage in major infrastructure projects and urged the government to assess the economic, environmental and social sustainability of projects, and how they can be aligned with state and federal priorities.

DeliverMyStrategy and Caravel Group have also been recognised in several nationally significant publications from Infrastructure Australia, including:

DeliverMyStrategy provides the critical support necessary for real governance to manage these priorities and deliver successfully in such complex environments.