DeliverMyStrategy and the Air Warfare Destroyers

The century of complexity

The Australian National Audit Office recently highlighted (ANAO audit summary is available online here and the full report is here) a range of factors contributing to potentially massive cost and schedule overruns in the program – exactly the sort of project and situation with which DeliverMyStrategy can really shine!

The report comes late in the program – overruns are now embedded and may be even more than reported. The ANAO identified 3 main factors to blame for this: 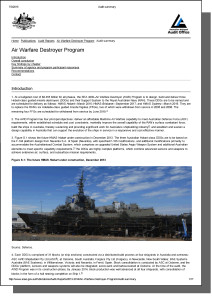 The Case for DeliverMyStrategy – the ANAO & the Air Warfare Destroyer

Nobody likes to hear ‘I told you so,’ but these echo almost exactly the phrasing of 3 of the 5 key root causes of project failures that Caravel Group have identified, and built DeliverMyStrategy to resolve.

For programs like the Air Warfare Destroyer that involve organisational complexity and complex delivery requirements, it’s virtually impossible to manage all the moving parts of the numerous organisations involved, from any single leadership position.

DeliverMyStrategy measures and manages the 5 root causes of failure, which are not captured by traditional approaches.

Specific measures are assessed through an independent project governor. This would almost certainly have detected and reported on the specific problems that have plagued this project in near real time, rather than this late in the program.

All parties would have had the performance feedback they needed to keep the project on track and deal with both local and systemic problems immediately – well before they blow the budget and the schedule.

With DeliverMyStrategy, everyone has the opportunity to take action to resolve issues at an early stage.

This is one way that DeliverMyStrategy delivers such huge value – early intervention dramatically reduces the costs of dealing with disasters, by sorting them out when they’re still just risks. And this includes giving very early indication of complex and abstract issues like governance failures.

If DeliverMyStrategy can prevented these massive problems with a huge project like the Air Warfare Destroyers, just think what it could do for you!